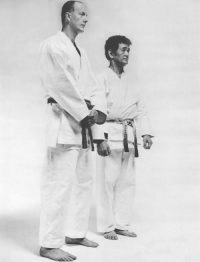 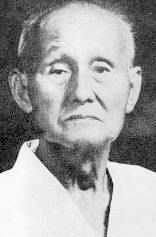 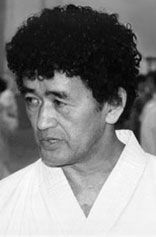 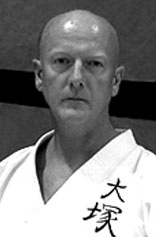 Ohtsuka-Sensei began martial arts training in Shindo Yoshin-kai jujutsu at age six, and by 1921, at the young age of 29, he was awarded the coveted “Menkyo-Kaiden”, designating him the successor as master of this style. Ohtsuka founded World Wado Karate in 1939. For his outstanding contributions to karate, the Emperor of Japan awarded Ohtsuka the “Fifth Order of Merit of the Sacred Treasure” in 1967. He was the first karate master to receive this distinguished award. In 1972, he was the recipient of the “Hanshi Award”, an even greater honor. Along with this award came the honor of being ranked at the head of all martial arts systems within the All Japan Karate-Do Federation. Just prior to his death, Ohtsuka-Sensei requested that everything under his direction be put under his name as karate. His new organization would act as a guardian of the ancient martial arts while promoting the essence and practice of authentic karate.

“Never forget about the past, concentrate on the present, and plan for the future.”

Sensei Shintani founded the Shintani Wado-Kai Karate Federation of North America and the World Shindo Federation. He was personally appointed the supreme instructor of Wado karate in North America by Ohtsuka Sensei. Sensei Shintani, a direct descendant of the famous Samurai Matsumoto Clan, began the study of karate in the Japanese internment camps of Canada under the master instructor Akira Kitegawa. An often brutal and vicious form of karate, it helped save the life of Sensei Shintani in the camps and formed the core of his training. After Kitegawa’s death Shintani competed in the All Japan Karate Championships over a period of years and caught the attention of Sensei Ohtsuka. Sensei Shintani then became his student and over time developed his own organization and the Shindo, a self-defense weapon which, in the absence of ballistic weapons, is unrivaled for its ability to disarm and incapacitate with minimal injury. Like Sensei Ohtsuka, Sensei Shintani sits alone in his uniqueness and has a special place in the modern world of martial arts.

“If you want to make something good, you will make a lot of enemies.”

Sensei Rempel is the founder of the AKF (Ohtsuka Amateur Karate Foundation) and a direct student of Sensei Shintani. The AKF’s roots date back to 1978, when Sensei Rempel started the first Wado program in Alberta. Sensei Rempel holds a Master Instructor’s Level 8th Degree Black Belt in both Karate and Shindo.

He is the personal biographer for Sensei Shintani and resident historian of both the Ohtsuka and Shintani Karate organizations. Sensei Rempel has studied karate since 1973 and has ranked over 150 black belts while developing a formidable karate organization. It is unrivaled for its depth of quality, attention to detail, and classic interpretation of the old martial arts. Sensei Rempel developed the Ohtsuka Amateur Karate Foundation (the AKF) out of the teachings of Sensei Ohtsuka and Sensei Shintani. Both historically and technically, this karate expresses the skill, courage and perseverance that characterizes the traditional style of training. It is a type of karate that practices hard training which is both disciplined and self-fulfilling. Sweat is the rule of the day and the only magic of the martial arts comes from constant practice where the work is hard, the discipline is strong, with no favours asked and no favours given. Sensei Rempel sees the study of the martial arts as being both of mind and body. If the mind is not correct, the art will not be correct. Without it develops the fear and violence that makes us beasts; with it develops the civility and courtesy that makes us human.

“Through life one thing is clear: show me with whom you walk and I’ll show you what kind of person you are.”

Karate began as a common fighting system known as “ti” (or “te) among the Pechin class of the Ryukyuans.  After trade relationships were established with the Ming Dynasty of China by Chuzan King Satto in 1372, many forms of Chinese martial arts were introduced to the Ryukyu Islands by the visitors from China, particularly from the Fujian Province.  A group of 36 Chinese families moved to Okinawa around 1392 for the purpose of cultural exchange, and shared their knowledge of the Chinese martial arts.  The political centralization of Okinawa by King Shohashi in 1429, and the “Policy of Banning Weapons” enforced in Okinawa after the invasion of the Shimazu Clan in 1609 were factors that furthered the development of unarmed combat techniques in Okinawa.

Gichin Funakoshi is generally credited with having introduced and popularized Karate on the main islands of Japan.

Hironori Ohtsuka (1892-1982) created the Wado-ryu style of Karate in 1934.  He was the first Grand Master of Wado-ryu Karate.   Ohtsuka began his martial arts education in 1898 at the age of 6, and initially studied Shindo Yoshin-ryu Jujutsu.  In 1922, Ohtsuka began karate training under Gichin Funakoshi in the style of Shotokan Karate.  He also established a medical practice specializing in treating martial arts training injuries.  In 1928, Ohtsuka became an assistant instructor in Funakoshi’s school, and also became a registered member of the Japan Martial Arts Federation.  Ohtsuka then began to have philosophical differences with Funakoshi.  This may have come, in part, from his decision to train with Choki Motobu.  Funakoshi’s karate emphasized Kata, a series of movements and techniques linked by the fighting principles.  Funakoshi did not believe that sparring was necessary for realistic training.  Motobu, however, emphasized the necessity of free application, and created a series of two-person kumite called Yakusoku Kumite.

Ohtsuka continued to gain recognition as he expanded the teaching of Wado-ryu Karate throughout Japan.  In 1972, Ohtsuka received the title of Meijin and the rank of 10th Dan by the Japanese royal family’s Higashi No Kuni no Miya, President of the Kokusai Budo Renmei (International Martial Arts Federation).  It was the first such honour ever bestowed upon a karate teacher in

The Ohtsuka Amateur Karate Foundation (AKF) is devoted to the preservation, advancement, and teaching of Wado-ryu Karate as envisioned by Ohtsuka Sensei, and passed on by Sensei Masaru Shintani, and now Sensei Joseph Rempel(Hachidan – 8th Dan Black Belt).  The AKF dates back to 1978, and currently operates seven clubs in Edmonton.